Why should you care about Social Loafing in the workplace?

In the last twenty years, organizations have utilized teams because of their effectiveness in producing creative and innovative products. When a team is effective, one of the reasons for this high performance is that team members make a unique and important contribution through their role and the ideas that they produce.

However, there are negative effects that occur from teamwork and one of these is social loafing, which has been extensively researched in the organizational science literature on teams. The concept of Social Loafing became popular when organizations wanted to understand losses in team productivity (Liden, Wayne Jaworski, & Bennett, 2016).

Research scholars determined that social loafing leads to a loss in productivity for organizations so this makes social loafing an important factor to understand for firm effectiveness.

What is Social Loafing?

Social loafing is a natural occurrence whereby employees tend to reduce their effort when working in a group rather than on their own (Karau & Williams, 1993). Social loafing is a pervasive phenomenon that reduces employee engagement and organizational effectiveness. 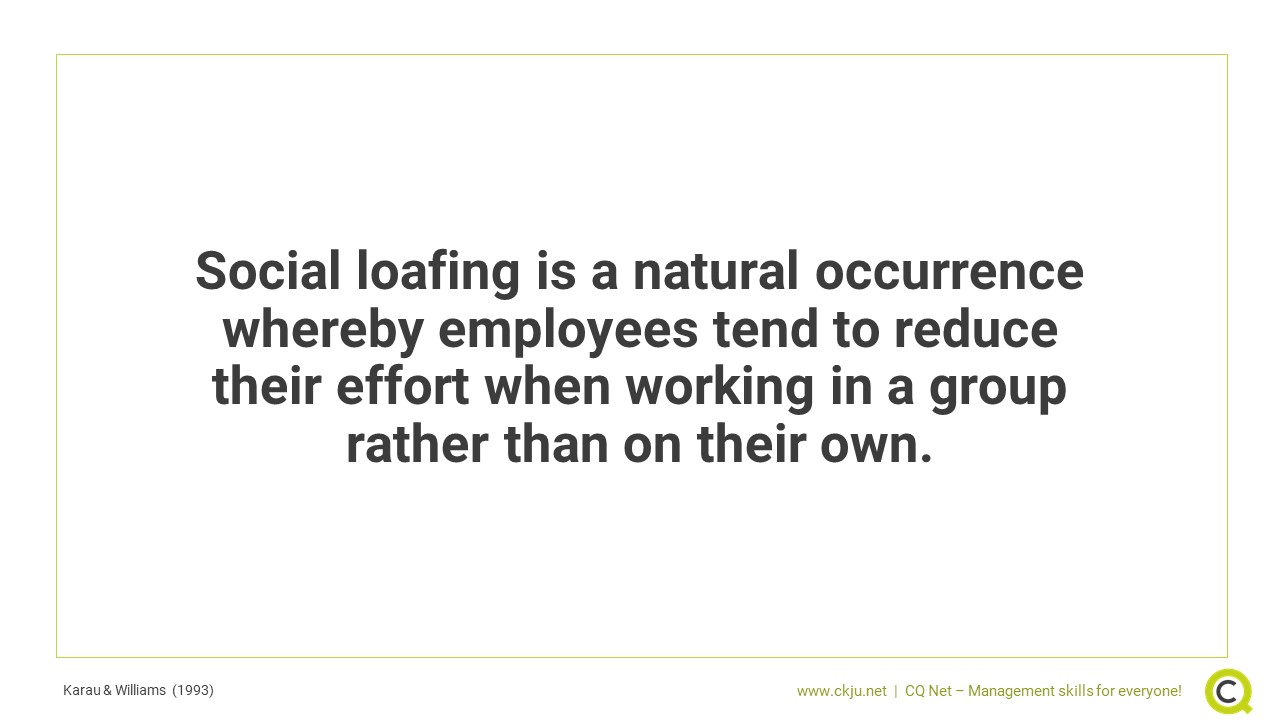 Both laboratory and field studies have examined the nature of social loafing to determine its antecedents. It is an automatic process that can be conscious or unconscious and is based on the notion that people tend to experience deindividuation when they work in teams as opposed to working alone.

Social loafing is due to a decrease in social awareness whereby individuals can resist efforts to fully engage in teamwork. Most researchers believe that the reasons why social loafing occurs is that it is motivational in nature (Karau & Williams, 1993).

What are the outcomes of Social Loafing in the workplace?

Social loafing occurs in the workplace when employees lose their social awareness in a team, compared to working along. Social loafing can have negative consequences for the team and individual team members (Karau & Williams, 1993).

The team dynamics change when social loafing occurs because there is a division between those who contribute and those who do not; this can result in an in-group and an out-group creating tensions between the groups.

Social Loafing is more likely to occur in big teams

First, when a team has many team members, social loafing is more likely to occur. Most experts suggest having no more than seven team members in a group. When there are more, there is the likelihood that team members will not participate if they not motivated to work in the team. 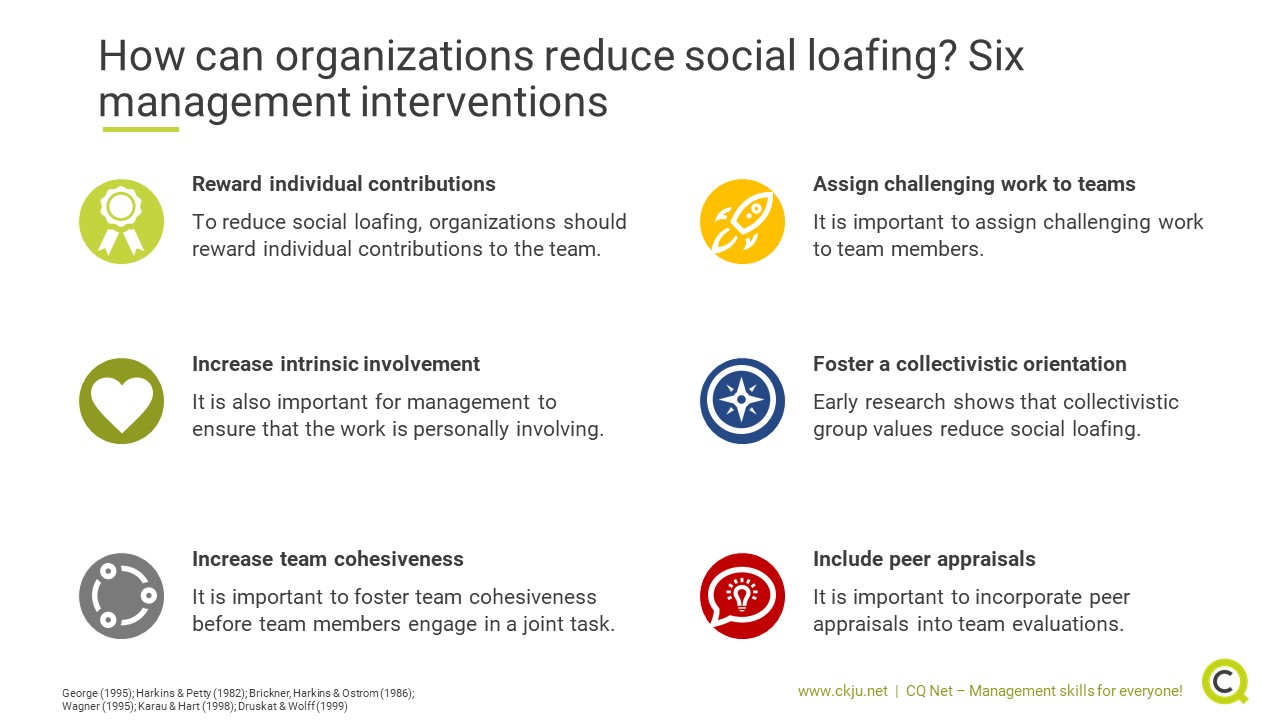 Finally, team members are less likely to exert effort an engage in social loafing if they feel that their contribution does not matter. This could be a matter of good communication rather than an issue with the team or team members itself.

How can organizations reduce social loafing?

Reward individual contributions to the team

To reduce social loafing, organizations should reward individual contributions to the team. In rewarding team members, management should engage in contingent rewards because this is negatively associated with social loafing (George, 1995).

Team members tend to engage in social loafing when they are rewarded but the rewards are not specifically related to team performance. It is important for management to acknowledge individual contributions to the team (George, 1995).

It is also important for management to ensure that the work is personally involving for team members; personal involvement in a task eliminates social loafing mainly because it increases intrinsic motivation (Brickner, Harkins & Ostrom, 1986).

Foster a collectivistic orientation within the group

Organizations tend to be more effective when they move away from the individualistic mindset that is inherent within most developed countries such as the United States and foster a collectivistic orientation within the firm. Early research shows that when teams have collectivistic group values, this reduces social loafing and increases cooperation (Wagner, 1995).

It is important that management foster team cohesiveness before team members engage in a joint task. Previous research has shown that when dyads agree strongly (high cohesiveness) on a controversial issue, they work just as hard collectively as coactively; dyads who disagreed strongly on an issue tended to engage in more social loafing (Karau & Hart, 1998).

It is important that management ensure to incorporate peer appraisals into team evaluations (Druskat & Wolff, 1999). When peers give each other feedback, this leads to less social loafing.

Moreover, peer feedback can be either negative or positive and still reduces social loafing and has a positive effects on relationships and task focus (Druskat & Wolff, 1999).

Social loafing can be reduced with the right organizational interventions

Despite the negative impact of social loafing on team performance, there is a large body of research showing ways in which it can be reduced. Most of these recommendations can be turned into organizational interventions so that teams can be fully productive.

George, J.M. (1995). Asymmetrical effects of rewards and punishments: The case of social loafing. Journal of Occupational and Organizational Psychology, 68, 327–338