Self-efficacy refers to one’s belief in ability to carry out a series of behaviors in a specific domain (Bandura, 1982; 2001). Bandura proposed that self-efficacy enhances performance through increasing the difficulty of self-set goals.

Because the individual has set difficult goals, they tend to increase their effort and are more persistent over time (Bandura, 2012). The model proposes that because high self-efficacy results in more challenging goals, there is an improvement in performance because of the discrepancy between the individual’s current state and desired state (Bandura, 1982; 2001).

Self-efficacy has been depicted as both a stable trait and as a situation-specific state that varies across domains. Bandura (1982; 2001) stated that individuals acquire mastery in a limited number of domains; it would be unfeasible to acquire mastery in all aspects of human life.

For example, a professional might have a high degree of efficacy for financial management but low efficacy for counseling. However, it is also feasible to conceive of self-efficacy as a trait because an individual can show relative constant levels across a variety of domains (Eden, 1988).

How to measure self-efficacy?

Researchers have devised several scales to measure self-efficacy. Researchers use Likert scales including strongly disagree to strongly agree as anchors. However, Bandura (2012) proposed that self-efficacy should be measured with a unipolar scale ranging from no confidence to complete confidence.

Within work psychology, Eden has devised several measures of self-efficacy that have demonstrated reliability and validity and follow Bandura’s guidelines.

For example, in a study of special forces candidates, state self-efficacy was assessed through the candidates rating their competence to perform successfully in three career stages (Eden & Kinnar, 1991). The 10-point scale was anchored with “I completely lack the requisite ability”, and “I have the ability to do very well.”

Eden (1988) also proposed an additional way to measure state self-efficacy through comparative quantiles (e.g., quartiles, deciles, percentiles) that express expected success in terms of subjective social comparison so the frame of reference is the individual’s competence relative to peers.

The third method suggested by Eden (1988) is determined by asking employees how much output they expect to produce if they worked hard. In the study conducted with special forces, the candidates were asked to indicate the grade (from 0 to 100) that they expected to obtain in each career stage.

There are also measures of generalized self-efficacy whereby self-efficacy is conceived as being more trait than state-like. A popular self-efficacy scale by Scherer and colleagues (Scherer et al., 1982; 1983) includes items like “When I make plans, I am certain I can make them work” and “When I decide to do something, I go right to work on it” using a 7-point Likert scale ranging from strongly agree to strongly disagree.

How to influence and build self-efficacy

Most of the research conducted on self-efficacy demonstrates that effective interventions can boost an individual’s self-confidence. 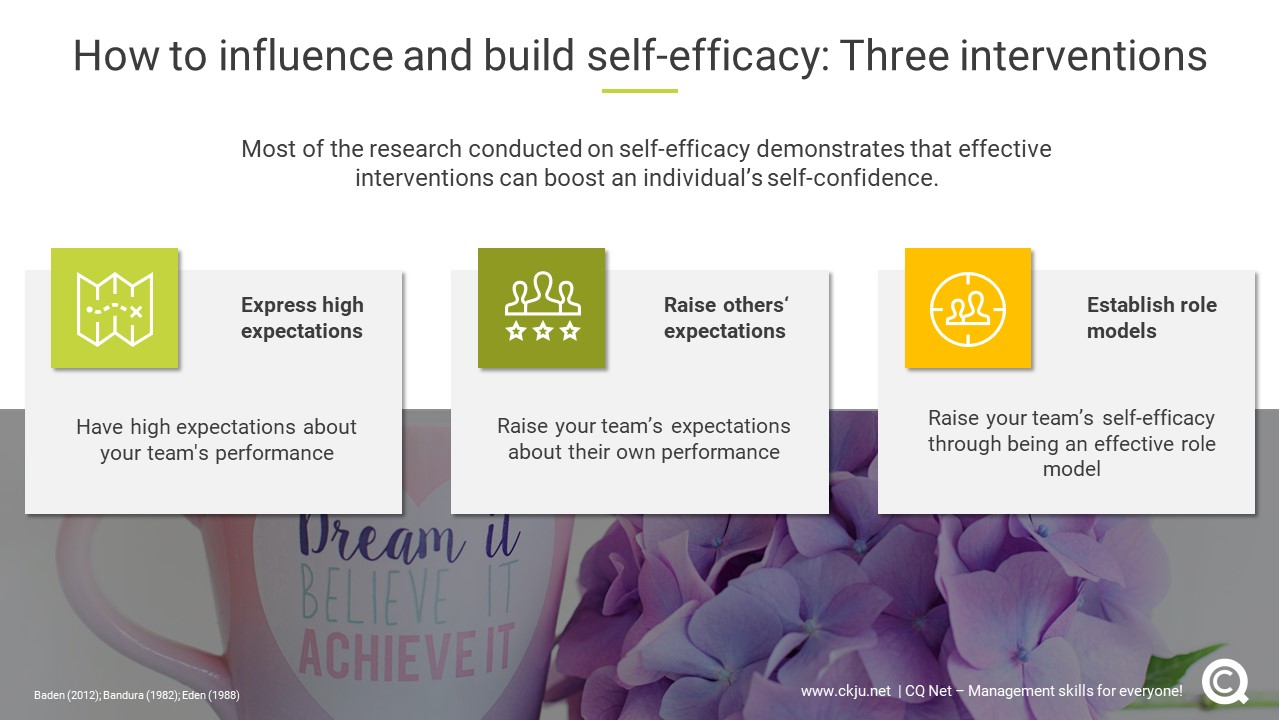 The Galatea Effect also boosts self-efficacy through raising subordinates’ expectations about their own performance. The Galatea effect can occur independently of the manager so can be useful in some situations where the employee doesn’t have a manager.

In an intriguing study on ethics, business students were exposed to role models of social entrepreneurs; those who were inspired expressed an intention to be like the entrepreneurs in their future business careers. There was also a boost to self-efficacy in the students’ belief that they could be ethical in business (Baden, 2012).

Self-efficacy is related to job performance in between-groups studies

The majority of research suggests that leaders can boost self-efficacy through showing confidence in their subordinates’ ability to perform well (Tims et al., 2011). One of the most effective interventions is through ensuring that leaders themselves are effective in motivating and boosting follower self-efficacy.

Overall the relationship between self-efficacy and performance is positive although recent research suggests that the effects are due to past achievements rather than to the boost to self-efficacy. It is recommended that managers boost their subordinates’ expectations through showing confidence in their ability.

Based on the empirical evidence for the relationship between self-efficacy and individual performance, this dossier is assigned a Level 4 rating, (Based on a 1- 5 measurement scale). A level 4 is the second highest rating for a dossier and the evidence provided on the efficacy of the relationship between self-efficacy and performance.

Bandura, A. (2012). On the functional properties of perceived self-efficacy revisited. Journal of Management, 28, 9–44.

Sitzmann T, Ely K. (2011). A meta-analysis of self-regulated learning in work-related training and educational attainment: What we know and where we need to go. Psychological Bulletin, 137, 421–442.

Sitzmann, T., & Yeo, G. (2013). A meta‐analytic investigation of the within‐person self‐efficacy domain: Is self‐efficacy a product of past performance or a driver of future performance? Personnel Psychology, 66(3), 531-568.