Why should you care about decisiveness?

As a professional it is your daily business to make decisions. This applies to your professional life in the same way as to your private life. Moreover, with an increased focus on self-responsibility, most organizations expect from their employees to be decisive. Consequently, decisiveness is a key characteristic important for professionals in leadership positions and beyond. We have a look at the foundation of decisiveness, how it works and what you can do to benefit from it.

In a fast-paced environment it is key to make timely decisions without losing time. Decisiveness is basically a trait or characteristic that describes people who are biased towards action even though they face uncertainty (Simpson et al., 2002). This makes decisiveness an important concept for professionals in almost any domain. 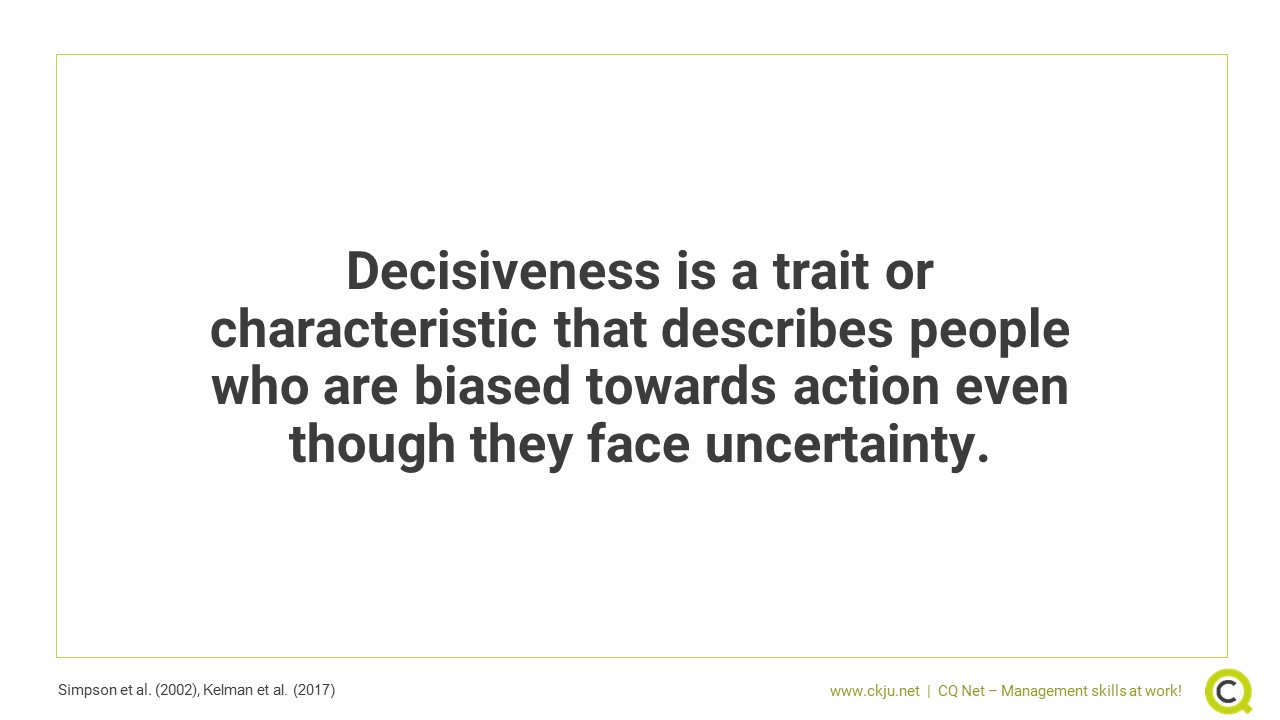 In politics, decisiveness or the perception whether one is decisive or not can make the difference whether presidential candidates win an election or not (Bernheim and Bodoh-Creed, 2020). In other areas such as healthcare and the private sector, decisiveness is perceived as a strength and success factor (Halstead, 1989).

How does decisiveness work?

In order to better understand the concept of decisiveness, it is important to know how it works. From a management skills point of view, we decided to have a detailed look at the following three ways to understand how decisiveness works:

Decisiveness as a personality trait

On a basic level, you can understand decisiveness as a personality trait. From this perspective, decisiveness is an enduring and stable characteristic that describes how people behave in similar decision-making situations. There are various personality models you can use to explain how decisiveness works.

In this Big 5 model, conscientiousness consists of the personality subdomains order, self-discipline and achievement striving which one could argue point into a similar direction as decisiveness. However, there is no clear-cut answer available yet whether it is fully covered by the personality domain consciousness or whether it is also related to other domains in the big 5 model.

Decisiveness in feminine and masculine cultures

This also explains why decisiveness plays a prominent role in traditional leadership approaches such as the great man theory. Therefore, especially in masculine cultures decisiveness is a characteristic people expect from leaders and professionals as basis to perform well (Hogan and Kaiser, 2005).

Being decisiveness does not necessarily mean that one makes the right decisions. In some high-risk cases, making the wrong decision could lead to a worse outcome compared to making no decision at all. Therefore, it is important not just to be decisive but to work on your decision-making competence.

According to Parker and Fischhoff (2005) decision-making competence consists of the following seven categories:

How to measure decisiveness?

Another way to measure whether you are biased towards action is to use one of the available indecisiveness scales. Germeijs and Boeck (2002) developed such a questionnaire that contains 22 items and has good psychometric properties. It covers questions such as “I find it easy to make decision” and “I don't know how to make a decision” (Germeijs and Boeck, 2002).

Finally, you can spend some time for self-reflection of recent situations where you had to make an important decision. In addition, you can also ask people close to you how they experience you when it comes to timely decisions and bias towards action.

How to implement decisiveness?

There are several ways to implement and strengthen your bias towards action. We will have a look at four interventions with a proven track record of having a positive impact on decisiveness and whether people experience you as a decisive professional.

Know your personality and your decision-making style

The first intervention is about knowing your personality strengths and weaknesses as well as your decision-making style. Once you better understand how you behave in different decision-making situations, you can start to work on your strong and weak points. Keep in mind that changing one’s traits is nothing which will happen overnight. An experiences management counselor can provide you the necessary support to develop to the next level. 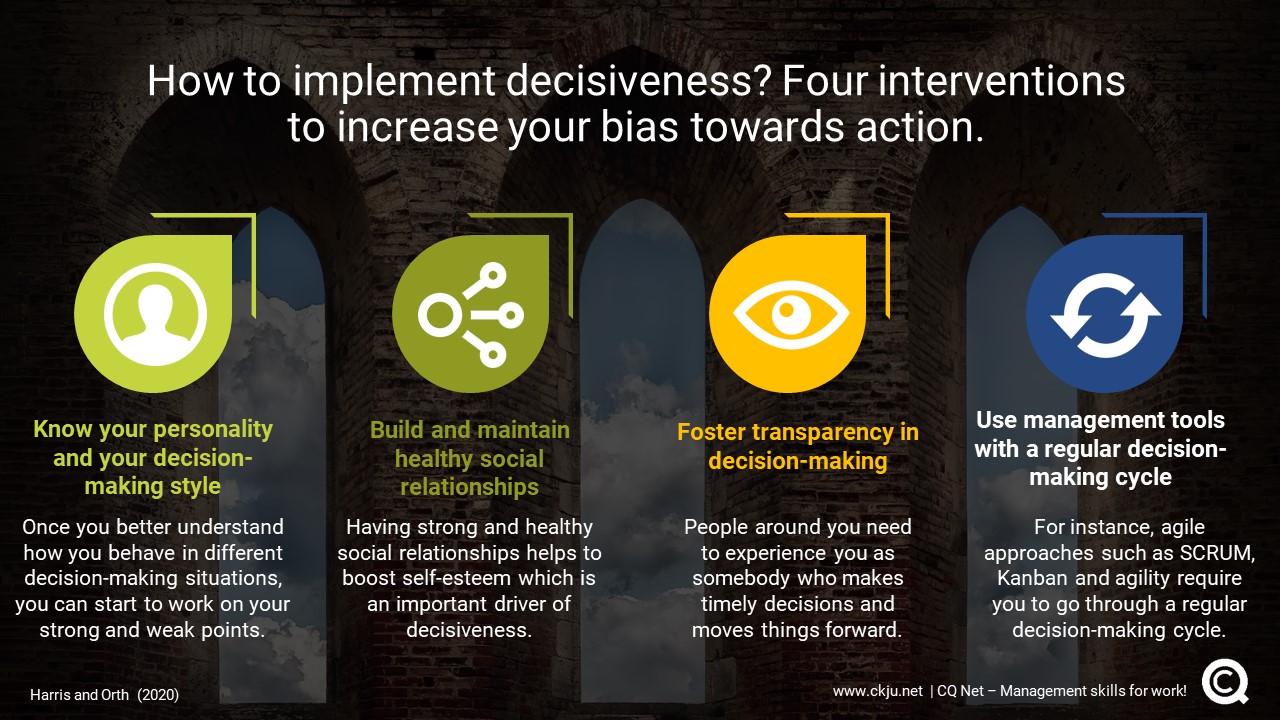 Social relationships are an important part of our professional and private life. Having strong and healthy social relationships helps to boost self-esteem which is an important driver of decisiveness (Harris and Orth, 2020). In addition, asking others for their opinion regarding important decisions can help you to think out of the box and improve decision-making quality.

Decisiveness alone is not sufficient to be seen as decisive by people around you. Others need to experience you as somebody who makes timely decisions and moves things forward. Foster transparency in your decision-making and decision-implementation process. Inform key stakeholders about important decisions taken and how your efforts towards implementation progress.

Use management tools with a regular decision-making cycle

Another way to implement decisiveness is to rely on management tools that have an build-in decision-making requirement. For instance, agile approaches such as SCRUM, Kanban and agility in general require you to go through a regular decision-making cycle.

What are the benefits of decisiveness?

As a professional it is important to know the benefits associated with decisiveness. Most organizations expect that professionals make timely decisions and have a focus on implementation. Being decisive is thus a trait generally considered as a strength.

On a more specific level, there are some research findings that support the claim that decisiveness is connected to a set of positive work outcomes. In a study of governmental executives Kelman et al. (2017) found that high-performing manager were more biased toward action than the comparison group. Decisive managers seem also to reduce the risk of experiencing stress in their employees (Mulki et al., 2012).

Germeijs, V. and Boeck, P. de (2002) ‘A Measurement Scale for Indecisiveness and its Relationship to Career Indecision and Other Types of Indecision’, European Journal of Psychological Assessment, vol. 18, no. 2, pp. 113–122.

Parker, A. M. and Fischhoff, B. (2005) ‘Decision-making competence: External validation through an individual-differences approach’, Journal of Behavioral Decision Making, vol. 18, no. 1, pp. 1–27.