This CQ Dossier describes workplace bullying, mobbing, and abusive supervision and the impact of these negative factors on individiuals and organizations. We also provide examples of the behaviors associated with it and give recommendations on how individuals, firms and other organizations can deal with bullying, mobbing and harassment at work.

The following dossier provides descriptions of bullying, mobbing and abusive supervision. The three constructs are similar yet distinct. They are similar in that all three involve negative behavior towards an employee that results in negative outcomes, such as poor performance and absenteeism.

They are distinct in that workplace bullying can originate from either a supervisor or peer towards an employee, yet abusive supervision originates from the leader. Moreover, workplace bullying and abusive supervision is typically one individual against another. Workplace mobbing is a multi-level phenomenon and typically occurs when a supervisor ‘whips up’ a group of subordinates to bully another subordinate. 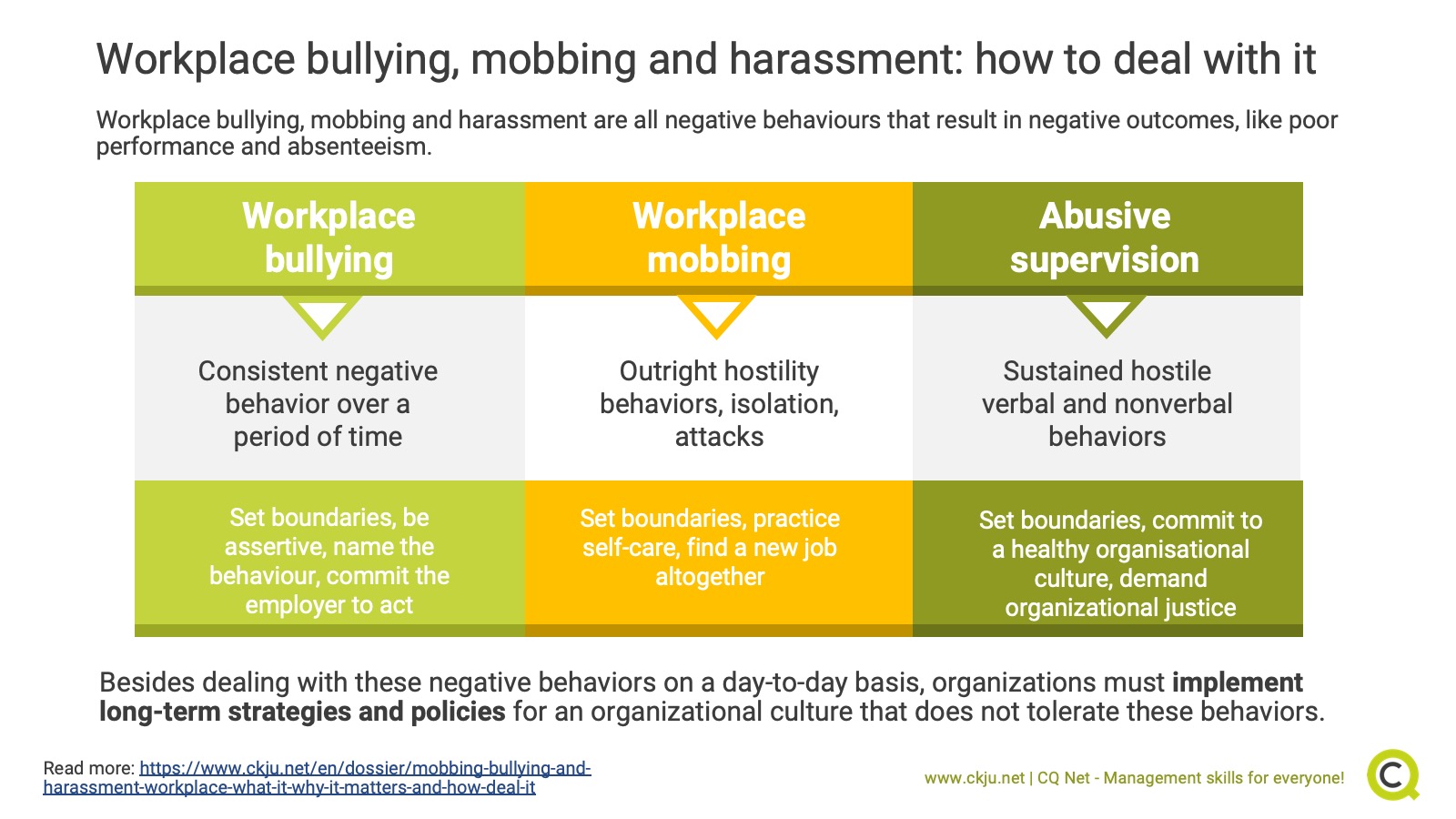 Workplace bullying is when an employee experiences consistent negative behavior over a period of time (Branch & Murray, 2015). A single episode is not enough to warrant the behavior as bullying. Workplace bullying includes verbal and non-verbal communication abuse, psychological tactics to undermine the individual such as gaslighting, physical abuse, and humiliation (Rayner & Cooper, 2006).

Unlike school bullying, workplace bullies are typically in positions of power and can justify their actions through the formal policies and procedures of the organization. It is important to note that there have been examples of peers and subordinates who bully their supervisors; however, the majority of workplace bullies are typically in a supervisory position (Rayner & Cooper, 2006).

Workplace bullying can take many direct and indirect forms

There have been several cases of workplace bullying documented by the media. One large case recently reported by the Willamette Week described how a supervisor physically harassed his subordinates through pelting them with objects from an air-compressor gun. The harassment lasted for six years and there was little done to discipline the supervisor. In fact, one of the employees who complained lost his job.

How to deal with workplace bullying?

The Workplace Bullying Institute suggest several actions to take including taking time off to heal and to launch a counterattack whereby the individual ‘names’ the behavior and also calls out the bully. Being assertive in stating that you are a victim of workplace bullying can compel your employer to take action.

In terms of strategies to avoid being bullied, it is important that at the first sign of bullying behavior you state that you won’t tolerate this kind of behavior. Secrecy and silence create environments for bullies in which to thrive. Through speaking out and being assertive, the bully will lose their power.

There is usually a particular intention behind workplace mobbing

Researchers have also shown that workplace mobbing is prevalent in certain industries such as health sciences, and academia. In one particular troubling case of workplace mobbing, a neurologist at McGill University committed suicide after experiencing mobbing when she was accused of violating ethical procedures (Seguin, 2016).

Workplace mobbing can lead to decreases in job and life satisfaction and can affect employee health and well-being. This can also have a negative impact on the organization as they deal with productivity losses due to sickness and other health issues (Nielsen & Einarsen, 2012). Moreover, over time victims of mobbing tend to quit the organization.

How to deal with workplace mobbing?

Henshaw (2018) suggests practicing self-care if you are a victim of mobbing. However, she also cautions that sometimes it is difficult to survive in an organization that support workplace mobbing, so sometimes it is best to find a new job.

Toxic or destructive leadership is connected to negative personality traits such as narcissism, psychopathy, and Machiavellianism, referred to as the “Dark Triad” (Paulhus & Williams, 2002). Especially leaders high in Machiavellianism tend to put their desire to gain control and power over others above everything else. Abusive supervision is one means to achieve this goal. Wisse and Sleebos (2016) found in a recent empirical study that position power strengthens the connection between Machiavellianism and abusive supervision.

How to deal with abusive supervision?

Consequently, it is important that organizations have a culture that is based on concern for others and have policies that reflect the elements of organizational justice: distributive, procedural and interpersonal justice.

Workplace bullying, mobbing and abusive supervision can have deleterious effects on both the individual and organization. It is vital for organizations to have policies and procedures in place that challenge these negative behaviors so that individuals can thrive and be productive.

Based on the empirical evidence for the evidence of bullying, mobbing and abusive supervision on organizational outcomes, this dossier is assigned a Level 5 rating (based on a 1- 5 measurement scale). A level 5 is the highest rating score for a dossier based on the evidence demonstrating that these negative behaviors can impact both individual and organizational effectiveness. To date, the research on all three constructs has demonstrated that they can have a negative impact on both the individual and the firm.

Henshaw, S. (2018). Bullying at Work: Mobbing is on the rise. Article retrieved from: https://psychcentral.com/blog/bullying-at-work-workplace-mobbing-is-on-the-rise/

Wisse, B. and Sleebos, E. (2016) ‘When the dark ones gain power: Perceived position power strengthens the effect of supervisor Machiavellianism on abusive supervision in work teams’, Personality and Individual Differences, vol. 99, pp. 122–126.