Virtual teams are groups of people who have a shared goal which they meet across space, time, and other boundaries. Advancements in communication technology have enabled virtual working for teams while changing customer needs that demand rapid responsiveness and flexibility have spurred the growth of virtual teams. However, challenges like greater risk of distrust among team members due to communication gaps, cultural differences and social loafing exist. Designing such teams with careful consideration of the skills of team members, strategies for frequent communication, task-technology fit, use of humour, and documentation of interactions can help control the impact of the challenges. In this CQ Dossier, we consider when it makes sense to make use of virtual teams and point out benefits and challenges associated with them.

What are virtual teams?

Teams are a group of individuals with specific goals and a purposeful structure. No matter what the organisational structure of a company is, teams are omnipresent. From production departments to quality circles, and now to virtual teams, the face and form of groups may change, but teams remain enduring. Virtual teams are defined as “groups of people who work interdependently with shared purpose across space, time, and organisation boundaries using technology to communicate and collaborate” (Robotham, 2008).

Virtual teams have become popular with the strides made in information technology that enable people to work together across boundaries of time, location, and regulations. Growing demands by customers, rising costs of travel, and the globalization of resources and customer demand have all contributed to the need for virtuality (Mortensen, Caya and Pinsonneault, 2009; Breuer, Hüffmeier and Hertel, 2016).  The unprecedented level of flexibility and responsiveness offered through digital media have really spurred their growth in all kinds of organizations (Powell, Piccoli and Ives, 2004).

Virtual teams, unlike regular teams, can be dispersed in their location with many multinational corporations working frequently across national, cultural, and temporal boundaries. This of course implies that in-person meetings are rare, if at all present, and digital media are used for discussions (Szewc, 2013). Modern organizations have to rely on virtual teams as they need their experts to collaborate on specific problems and client demands that cannot be limited by time, space, and cost constraints.

Challenges in the working of virtual teams

Working in virtual teams has set of advantages compared to traditional teams with members located at the same place and time zone. However, those advantages don’t come without associated challenges. We have a look at some of the challenges associated with virtual teams and how to tackle them.

Most studies have reported that the absence of personal meetings and interaction creates a gap in trust among team members (Robotham, 2008; Berry, 2011; Szewc, 2013). This is due to the increased risk of misunderstandings and a higher chance of team conflict related to the absence of social control and context information (Breuer, Hüffmeier and Hertel, 2016). Such a trust deficit can undermine the working of the entire team as members become doubtful and suspicious about the motives of their colleagues. As a consequence, team effectiveness deteriorates.

The distrust among virtual team members can spiral out of control with another challenge in their mode of working which is communication gaps. When team members devote more time in trying to find common times to meet and clarify issues, the chances of working at cross-purposes increase (Breuer, Hüffmeier and Hertel, 2016). The limitations set by the difficulty in perceiving non-verbal cues in communication can contribute more to misunderstandings. Moreover, opportunities for virtual meetings to discuss these misunderstandings and understand each other’s points of view are also limited by the lack of personal meetings.

Communication issues due to culture differences

Another factor that is a challenge is the working together of people from diverse cultures which can further make communication difficult as semantics and work practices are greatly influenced by culture. Though globalisation, more opportunities for expat working, and the growing reach and popularity of cinematic medium through streaming services is helping to create reference points for different cultures among people, culture can still play an ambiguous role. For instance, the American style of calling co-workers and even bosses by their names is considered very rude in most Asian cultures and can create a perception of disrespect in a virtual team.

Social loafing due to a lack of leadership

Lower managerial control and a lack of close monitoring of work can encourage social loafing (Alnuaimi, Robert and Maruping, 2010). These factors may seem to show that working in virtual teams is very difficult, but certain precautions can make these teams a success.

What determines whether a virtual team performs well?

Powell, Piccoli and Ives (2004) have provided a framework that describes the factors that indicate the success of virtual teams. 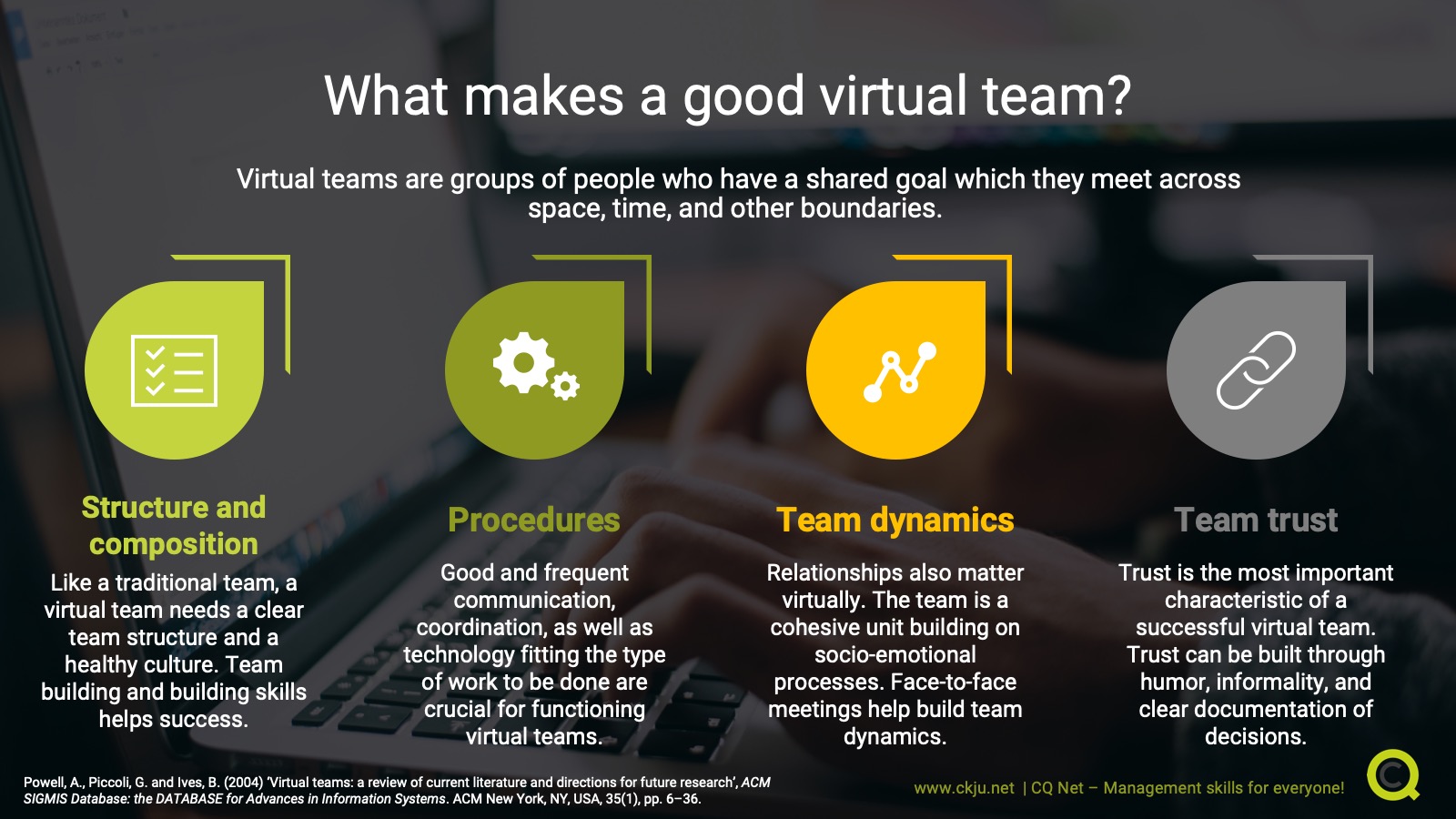 The first set of factors are the input which are the design, culture, technical skills, and training of the team. It is evident that these factors remain the same for traditional teams. The human capital of a team is what determines their potential for success. Studies have shown that conducting team building exercises and having a clear team structure contributes to making a successful virtual teams (Kaiser, Tullar and McKowen, 2000; Malhotra, Majchrzak and Rosen, 2007).

The second set of factors are the task processes which include effective communication, coordination, and a fit between the task and the kind of technology employed. Research has consistently reported that periodic use of face-to-face meetings is crucial to the success of virtual teams (Kirkman et al., 2004; Nunamaker Jr, Reinig and Briggs, 2009; Brahm and Kunze, 2012). This is so because personal interaction can help teams to define their projects better at the start, help its members to socialize with each other, and contribute to trust building.

The third set of factors are the socio-emotional processes which include building relationships among the team members, keep them as a cohesive unit, and build trust among them. As virtual teams differ from traditional ones in this category the most, it is important to pay more attention to team dynamics. Apart from face-to-face meetings, finding opportunities for social communication among team members has been found to create more functional teams (Kayworth and Leidner, 2000; Powell, Piccoli and Ives, 2004; Nunamaker Jr, Reinig and Briggs, 2009).

Trust in virtual teams: How to foster it

Trust building is one of the most commonly cited factor for the success of virtual teams and it is even pointed out that short-term teams are able to perform better as the team members exhibit high trusting behaviours in them (Meyerson, Weick and Kramer, 1996). This phenomonon is called swift trust and it shows the importance of trust in the success of all teams.

In fact, Kayworth and Leidner (2000) have shown that leaders can make their virtual teams more successful by facilitating chat sessions and encouraging the use of humor. Chat sessions help bring informality in the team relationships that can encurage people to mingle more and clarify any doubts and misgivings they may have about each other or the work. Humour is a medicine that can bring people closer and help them overcome the limitations put by distance among them.

Recording team interactions is a great way of reducing ambiguity in team functioning. Keeping minutes of meetings and sharing them with members right afterwards can help emphasise the topics of discussion and reduce any confusion about roles and responsibilities.

When to use virtual teams

It may seem that virtual teams are the answer for time and location constraints, but they are not always the best solution.

Use when flexibility, speed, and time are of the essence

Virtual teams are best employed when flexibility and dynamism are needed to resolve a problem in a short span of time (Berry, 2011). Virtual teams are the answer for organizations that have their personnel spread across the globe, need their input for making rapid decisions, and need to bring together cross-functional people for short-term projects (Hertel, Geister and Konradt, 2005). Uncertain environments where client preferences change rapidly benefit the most through virtual teams as they keep costs down and allow a great deal of flexibility in operations (Lurey and Raisinghani, 2001).

When not to use them

As virtual teams have a higher probability of experiencing task and relationship conflict and a caveat of task-technology fit exists for them (Curşeu, Schalk and Wessel, 2008), it is advisable to refrain from using them for tasks that require greater cohesion, brainstorming, and building of ideas within the team. For instance, a research and development team will probably function better if they can meet, discuss, and critique their ideas in person.

Virtual teams are a necessity of the times, but they need time and managerial attention to build trust and create functional team relationships.