This CQ Dossier examines the benefits of humility within the workplace. Most research on human behavior in the workplace has focused on the more popular personality traits such as the Five Factor Model of personality. The concept of humility has received attention, but the research has struggled in understanding:  a. how to measure it and b. determining the importance of humility for leadership and organizational effectiveness. This CQ Dossier provides: a) a definition of Humility; b) a discussion on the measurement of humility and c) the positive and dark side of humility. In addition, we provide practical recommendations on how organizations can benefit from appreciation of the importance of humility in shaping processes and practices within the workplace.

What is humility? Humility is a positive characteristic of human functioning

Humility involves both intrapersonal and interpersonal behaviors. In a Psychological Science article, Davis and Hook state that humility occurs when an individual has an accurate view of themselves and also focuses on other people more than themselves so they are ‘other-oriented’ rather than self-focused. The concept of humility has received attention from positive psychologists such as Martin Seligman who perceive humility as a positive force for flourishing (Peterson & Seligman, 2004). Over the last few years, there has been an increase in empirical research on humility and the overall view is that humility is a positive characteristic for human functioning in all domains, including the workplace.

How is humility measured? The bright and dark side of humility

Despite the increase in empirical research on humility, there are still problems with determining how to measure the construct (Weidman, Cheng & Tracy, 2018). Researchers have conceptualized the construct in various ways including a view of the humility as a personality trait, a type of intelligence, or an accurate self-assessment (Weidman et al., 2018). 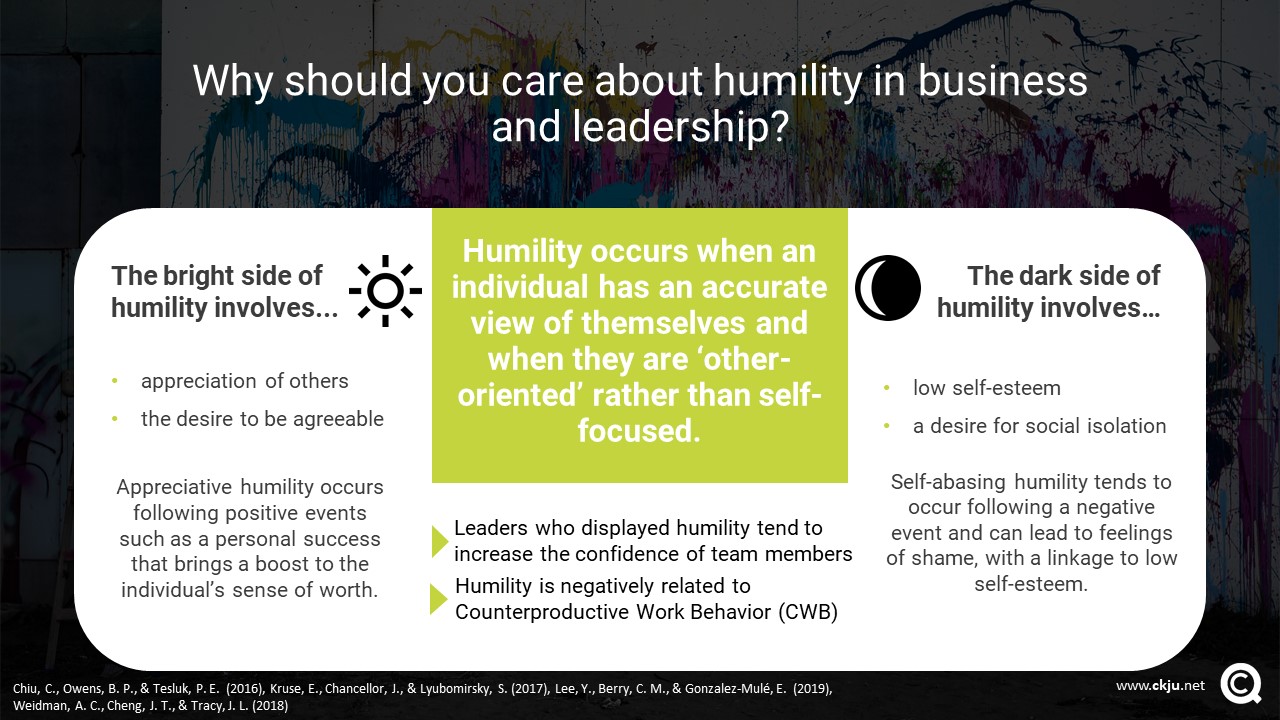 Weidman and colleagues challenge the notion that humility is a positive force in the workplace and suggest that it might have a ‘dark’ side. In a series of studies, they found that individuals conceive humility as both a positive and negative construct. These distinct dimensions of humility represent an appreciative component and a self-abasing component (Weidman et al., 2018).

Positive view of humility emphasizes appreciation of others

The positive view of humility is shown as an appreciation of others and a desire to be agreeable. Appreciative humility occurs following positive events such as a personal success that brings a boost to the individual’s sense of worth.

The other, more negative view of humility, involves low self-esteem and a desire for social isolation (Weidman et al., 2018). In comparison, self-abasing humility tends to occur following a negative event and can lead to feelings of shame, with a linkage to low self-esteem.

Humility is malleable due to situational forces

One way to overcome the measurement issue of humility is to appreciate that it is malleable due to situational forces that can either increase or attenuate feelings of humility. To capture this nuance in understanding humility, Kruse and colleagues (2017) developed a brief state humility scale using 25 samples, and 2622 adults. The 6-item measure, on a 1 (strongly disagree) to 7 (strongly agree) Likert scale includes items such as “I feel that, overall, I am no better or worse than the average person.”

The measure demonstrated solid validity and reliability and was also sensitive to experimental manipulation suggesting that humility is a state as well as a trait. Moreover, the measure was not correlated with social desirability, suggesting that respondents were honest in their responses.

How is humility related to workplace performance?

A recently published meta-analytic review of humility found that the construct was related to several workplace outcomes that are reflective of performance. The researchers focused on the relationship between humility and counterproductive work behavior (CWB), organizational citizenship behavior (OCB), and task performance (Lee, Berry & Gonzalez-Mulé, 2019). They also examined whether humility made an incremental contribution to these outcomes, after controlling for individual differences such as cognitive ability and the Five-Factor personality model.

How is humility related to leadership effectiveness?

Research has focused on the how a leader’s humility leads to better team functioning. It seems feasible that leaders who display humility will be better liked leading to a sense of cohesion in the teams that they lead. Chiu and colleagues (2016) examined whether a leader’s humility is related to shared leadership and team effectiveness among a sample of 62 work teams in Taiwan. Shared leadership is a team-level phenomenon that is related to reciprocity and shared influence among team members on how to reach team goals (Chiu et al., 2016).

Humility is related to shared leadership

In the study they found that leader humility was related to shared leadership. Leaders who displayed humility tended to increase the confidence of team members to take the lead and these leaders with humility also valued other team members’ participation in decision-making (Chiu et al., 2016). These types of behaviors on the part of the leaders with high humility led to higher team performance because the teams became more proactive (Chiu et al., 2016).

Overall, the research shows that humility is an important construct in organizational psychology and is worthy of investigation. In particular, it seems that leader humility is important particularly in work teams. The study conducted by Chiu and colleagues also suggests that humility is a valued characteristic for leaders in collectivistic societies where there is a focus on the collective rather than the individual.

Based on the empirical evidence for the relationship between humility and business success, this CQ Dossier is assigned a Level 4 rating, (Based on a 1- 5 measurement scale). A level 4 is the second highest rating score for a CQ Dossier based on the evidence provided on the efficacy of humility.

To date, the research on humility has demonstrated the importance of this construct on several organizational outcomes, after accounting for other individual differences. However, there are some issues regarding the measurement of humility that need to be addressed.

Lee, Y., Berry, C. M., & Gonzalez-Mulé, E.  (2019). The Importance of Being Humble: A Meta-Analysis and Incremental Validity Analysis of the Relationship Between Honesty-Humility and Job Performance." Journal of Applied Psychology.